I’ve heard Chernobyl, Ukraine is best described as a living museum. It’s perhaps the best way to explain what is now referred to as the exclusion zone because it truly feels like even the cities decomposition is a way of preserving what happened there. The exclusion zone – the region now off limits due to residual radioactivity from the 1986 power plant accident – is largely deserted, apart from the military and scientific staff that are rotated in shifts to maintain its borders and keep a close eye out for fires or illegal settlers. Chernobyl, Pripyat, and surrounding regions as they once were remain mostly untouched, apart from some looting of valuables. What you’re left with is a soviet era, soviet inspired group of cities and small towns that have been completely abandoned and retaken by nature.

There are many things to find fascinating about a place like Chernobyl, as heartbreaking and destructive as its history has been on a global scale; the radiation and its effects on the environment and surrounding region are of scientific importance, the untouched nature reserve that’s been, for all intents and purposes, created by the barring of human inhabitants and has allowed species including the famed Przewalski horses, not to mention the history of the city itself. But a less commonly discussed topic is the artwork (contemporary and otherwise) that can be found within old buildings, in the glasswork on soviet funded train stations, or graffitied in brilliant strokes across the coolant towers near the plant.

A dozen pieces could be written about all sorts of fascinating oddities within Chernobyl, but here I want to discuss some of the most striking visual displays we saw while in the exclusion zone, going through Pripyat, and the surrounding regions.

There were a couple of particularly striking stained glass displays, one shown above in an unknown building, and one largely preserved display from overgrown train station. While not strictly approved to go inside, the glass is best seen from within, with the light from outside making the even old, vine and dirt covered glass glow.

The train station in particular contained other historically unique sites worth looking for, including a coin operated water dispenser with the same reusable glass for all customers.

Overgrowth up and onto the rails made the station slightly more difficult to discern, but once you’re close, the glass panes are easy enough to spot.

Given my limited knowledge of Soviet architectural influence, it wasn’t until after I returned from Chernobyl that I realized soviet mosaics have a place in a lot of the country’s construction. They can be spotted at bus stops, in Kiev, and have been the subject of photojournalists and art books alike. 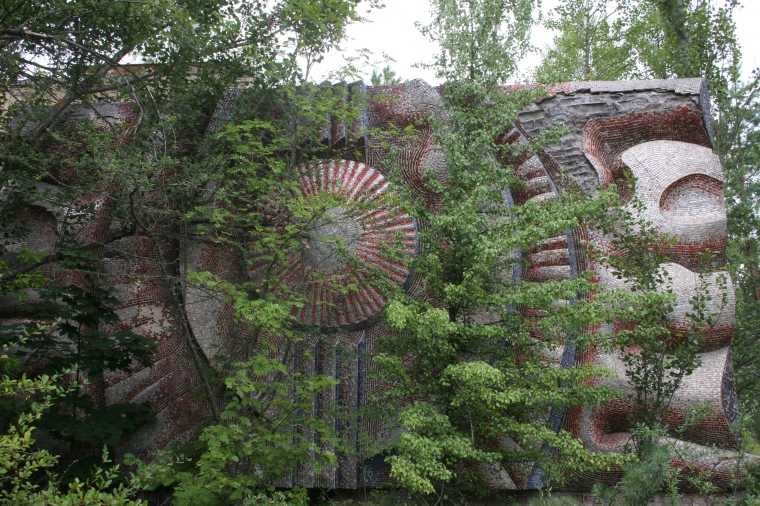 It’s therefore not surprising that I found so much tile work and mosaic art around the exclusion zone, but the fact that the details and shaping of much of the work remains impressive to this day despite water damage and plant growth is surprising.

Finally, the recently produced work of graffiti artists in the zone deserves mention, not just because of heavy patrols and strict trespassing laws that make this kind of work particularly risky, but also because much of it is so politically charged and strongly felt. There are debates about whether modifying what is already such a perfect testament to the power and dangers of nuclear radiation can really be improved by the addition of spray paint or wheat paste postings. One artist in particular seems to have the technical capability and command of subject matter to make a strong impact despite those arguments (shown top). 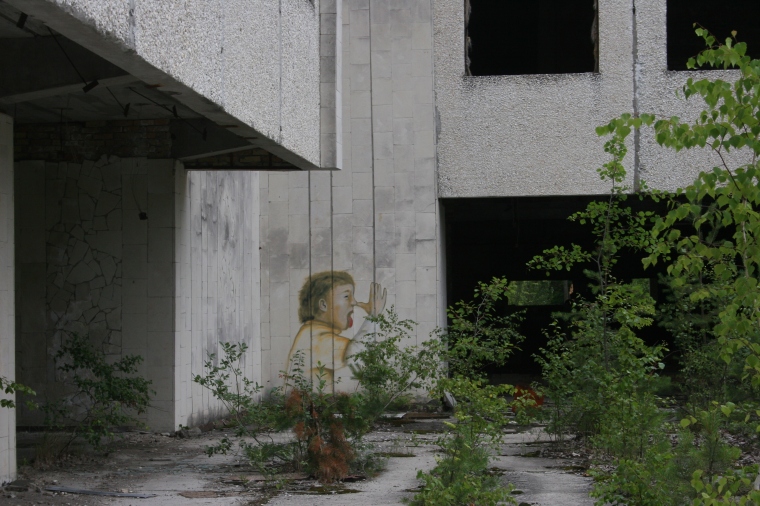 While not the most common travel destination, Chernobyl and the exclusion zone has grown increasingly accessible and less usual as a destination. Hopefully some of the beauty of the city can continue to be seen, alongside the natural history, and the hard earned lessons gained from the disaster that took place there.

Aghasi Byan is a full time undergraduate student in American University of Armenia. His major is Computer Sciences, but he also has 3 years of experience in teaching mathematics to high school and college students. Aghasi participated in many Erasmus+ international exchange programs, improving his English and leadership skills.